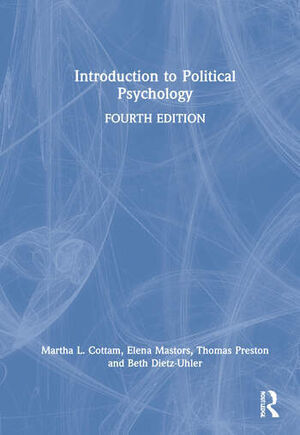 Introduction to Political Psychology explores the many psychological patterns that influence individual political behavior. The authors introduce readers to a broad range of theories, concepts, and case studies of political activity, arguing that individuals are driven or motivated to act in accordance with personality characteristics, values, beliefs, and attachments to groups. The book explains many aspects of political behavior-whether seemingly pathological actions or normal decision-making practices, which sometimes work optimally, and sometimes fail.

Thoroughly updated throughout, the book examines patterns of political behavior in areas including leadership, group behavior, voting, race, nationalism, terrorism, and war. This edition features coverage of the 2016 election and profiles former U.S. President Donald Trump, while also including updated data on race relations and extremist groups in the United States. Global issues are also considered, with case studies focused on Myanmar and Syria, alongside coverage of social issues including Black Lives Matter and the #MeToo movement.

Accessibly written and comprehensive in scope, it is an essential companion for all graduate and upper-level undergraduate students of psychology, political science, and political psychology. It will also be of interest to those in the policy-making community, especially those looking to learn more about the extent to which perceptions, personality, and group dynamics affect the policy-making arena.

It is accompanied by a set of online instructor resources.